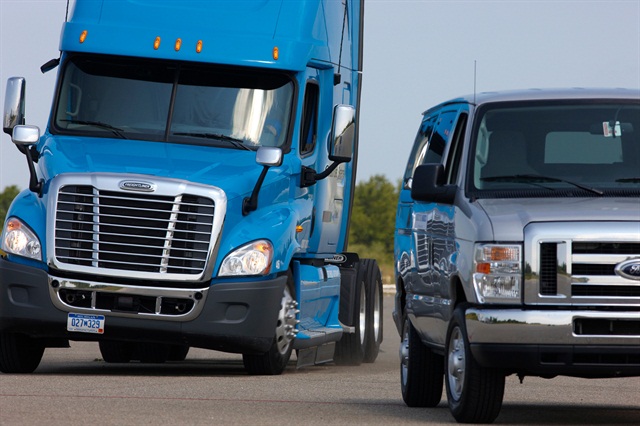 Meritor Wabco’s OnGuard collision mitigation and adaptive cruise control is a radar-based system that detects objects ahead and measures the truck’s distance relative to other vehicles or objects on the road. It alerts the driver with audible and visual warnings that a rear-end collision is possible.

While we’re still years, if not decades, away from “driverless trucks,” many of the latest safety technologies on trucks and cars may help us get there – and even if they don’t, they’ll save a lot of lives in the meantime.

Yet despite all the collision avoidance, rollover prevention and other safety technology available today, the most important part of a safe trucking operation remains the person behind the wheel, the driver.

Carriers must hire the right ones; train, monitor, coach and reward the ones they have, and provide their drivers the tools and working conditions they need to be safe. Still, technology can help.

Some systems track and monitor driver and vehicle performance, so drivers who need extra training can be identified and those who are performing exceptionally can be rewarded. Or driver managers may use data analytics to create models that help predict which sub-set of drivers may be a potential safety risk. Onboard communication devices record vehicle engine data, speed, location or other information during critical events, such as hard braking or excessive g-forces. Onboard video recording systems capture video from inside the cab and in front of the truck during events that can be analyzed for risky driving behavior. Collision avoidance, stability control and lane departure warning systems actively alert drivers of potentially unsafe conditions and in some cases even take action on their own. Motor carriers are increasingly taking advantage of these technologies. Con-way Freight recently announced it had fully deployed its Drive Safe Systems fleetwide. That system combines three in-cab safety technologies the company has been using since 2009 with two newer technologies. To the Meritor Wabco OnGuard collision avoidance system, AutoVue lane departure warning system from Bendix Commercial Vehicle Systems and Meritor Wabco’s roll stability control, the less-than-truckload company added Lytx’s DriveCam event recorder and an onboard performance management system from Vnomics Corp. Air Liquide announced in March that new trucks rotated into its bulk fleet will feature safety technologies including a collision prevention system, front and side-mounted radar sensors to detect vehicles around the truck, rollover stability control and a dual-facing event recorder. Wayne Brown, vice president information technology with Maverick USA, said the Arkansas-based fleet had “made a lot of progress over the years with active safety devices.” Plus, the company compiles data from these systems in its own database. The information they glean is then used to coach drivers to help them improve their driving skills. In general terms, safety technologies that fleets deploy can be passive or active. Passive safety systems have long meant items such as seat belts and head restraints, but in today’s age of information technology, passive systems can include those that track, monitor and record data from the truck’s onboard computer, mobile communications or other systems, which can later be reviewed via reports or scorecards – or send an exception notice directly to the fleet manager via telematics systems.

An active system takes specific actions when the system determines a dangerous event is occurring. Antilock brakes are a common example. Today they go much further. Collision avoidance systems, for instance, detect vehicles or stationary objects in front of the truck and issue alerts when the distance between the truck and the vehicle in front passes a certain threshold. If the driver does not take action, the system can apply the truck’s brakes and depower the engine independently. Other tools combine the data from both types of systems into analytical models designed to help fleets predict which drivers need extra coaching or may pose safety risks in the future. Track, monitor, coach and reward Technologies you may already use to improve freight and fuel efficiency also can help make your fleet safer. “Many customers are already deploying technologies but not using them to their fullest in terms of safety,” says Rick Ochsendorf, senior vice president operations and product management with PeopleNet. “We go out to customers and help them develop procedures and processes to capitalize on these safety tools.” Integrating automated hours-of-service applications with dispatch, for instance, allows the back office personnel to know not only which trucks are closest to a load but how many hours each specific driver has remaining for the day or week. Other systems can improve safety when integrated with a telematics system, such as tire pressure monitoring systems and electronic vehicle inspection applications. For instance, the tire pressure monitoring system from Doran Manufacturing integrates with several popular telematics platforms so that in addition to alerting the driver with a low-pressure alarm, the alert can also be sent to fleet managers in the back office making them aware of potential safety issues. A mobile communications/telematics platform’s ability to collect engine and vehicle data allows fleet managers to identify drivers needing more attention via reports, scorecards or alerts. With real-time alerts, a fleet manager can get instant notification of excessive speeding or other event. As for scorecards, they allow drivers to see how well they are doing in terms of overall performance, fuel efficiency and safety. “There’s nothing more powerful than a driver scorecard,” says Ryan Barnett, director of market development with XRS Corp. “It’s amazing how fast drivers will change their behavior” when they are able to see how they rank among other drivers. Beyond collecting engine and driver performance data that can be used for scorecards, event recorders capture what happened right before and right after an event such as hard braking, sudden deceleration, etc.